Don't Hotlink Your Font Files
August 5, 2010 by Noah
Everybody who hotlinks their EOT font files from my ttf2eot tool will see the Sabrina font instead of the one they wanted.

My ttf2eot tool is a converter tool only; it does not host your EOT font files. Do not hotlink directly to the files on my server. The files only remain for up to 24 hours and then are deleted. If you hotlink to a deleted font, you will get the Sabrina font instead, which most likely isn't what you want.

Tags: 2 comments | Permalink Online TTF to EOT Font Converter
August 5, 2009 by Noah
After posting my initial blog post about embedding fonts in a way that works with Internet Explorer and Firefox 3.5, a reader has informed me that he had some trouble running the ttf2eot program on Windows XP.

So I've created a web-based converter tool to turn TrueType TTF fonts into OpenType EOT fonts, to go along with my other tools that turn images into favicons and turn images into XBM masks. 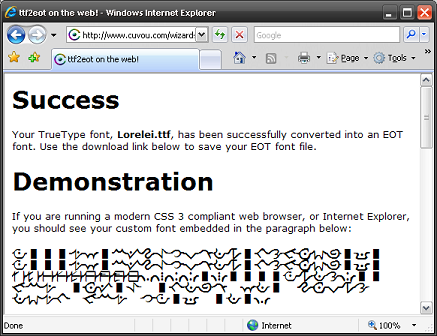 You can use the new tool here. As with all the other tools, your converted files are cleared off the server after 24 hours, so don't think about hotlinking your embeddable fonts!

Tags: 36 comments | Permalink Embedded Fonts for Firefox and IE 6
July 17, 2009 by Noah
One of Firefox 3.5's new features includes support for the @font-face attribute of CSS 3, which allows you to embed a TrueType Font file on a web page, so that the user will see the font on your page even if they don't have the font installed on their computer.

This feature has been possible in Internet Explorer since version 4.0, but IE uses a variant of OpenType Font instead of TrueType. IE was the only browser to support such a thing for a long time, so it never really caught on.

Now that Firefox and other CSS3-supporting browsers are implementing @font-face for TTF, we can combine that feature with IE's support for EOT font files and get embeddable fonts to work on both browsers.

I have a demonstration here: Embedded Font Test. This page embeds my Rive font, which is available (in TTF form) from my Fonts page.

To convert TTF to EOT files, you can use Microsoft's WEFT tool which has been around since the dark ages, but I much prefer ttf2eot, hosted at Google Code. This is a no-nonsense tool that gets straight to the point of converting a font file without the hassle of dialogs that must be clicked through with WEFT. Oh, and there's conveniently a Windows executable already built, just grab it from the Downloads page.

And then embedding the pair of fonts on a page that is compatible with both IE 6 and Firefox 3.5 (and I imagine other CSS3-compliant browsers, though I haven't tested them): IE 6 knows to ignore the TTF entry, and Firefox knows to ignore the EOT entry, as each browser can't display the opposite type of font.
Tags: 12 comments | Permalink
Copyright © 2022 Noah Petherbridge — All rights reserved
Hosted by DigitalOcean
Page generated in 0.0309s.