🎁 NEW in January 2023: I have recreated my program from scratch and released a new "2.0" version for the modern era - details below. My original 2006 version is still available here. 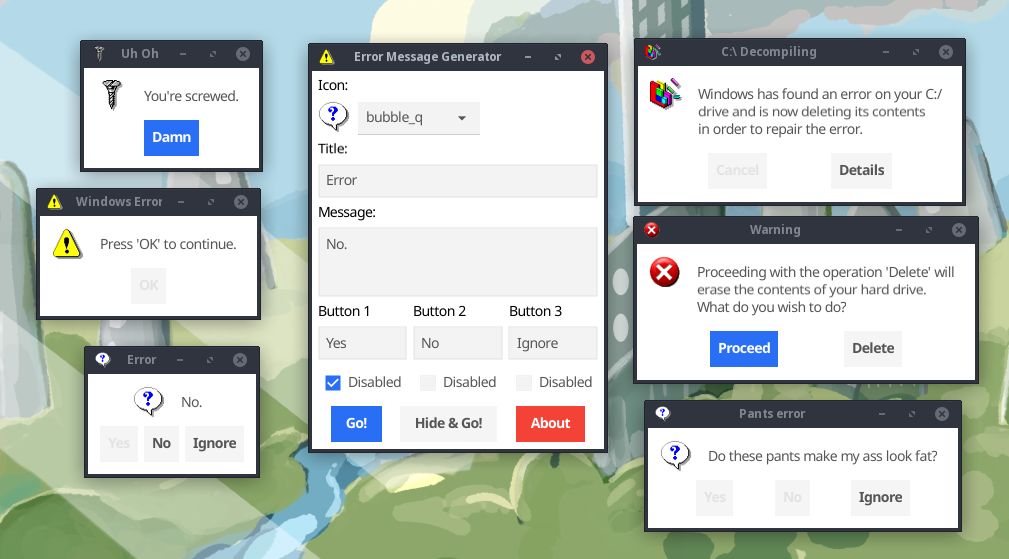 Way back in 2006 while I was still in high school, I had created my original ErrorGen program (written in Perl/Tk) in one afternoon and released it on my site. After Atom Smasher's site went down in 2022, I have seen an uptick of interest for my ErrorGen program - which was last compiled in 2008 for Windows XP and shows its age and doesn't run very easily on Windows 11 in 2023.

So, on January 21, 2023 I built a new successor to ErrorGen, this time in Go and to explore the Fyne UI toolkit. The "2.0.0" release of ErrorGen has equivalent functionality to my original Perl app, and the command-line interface I previously called ZenMsg is built-in to the same binary as the graphical ErrorGen tool. You can call ErrorGen from batch files or shell scripts if you want to ask the user a quick question!

Looking for my classic Perl ErrorGen from 2006? See over here for the original ErrorGen page.

This program has two main use cases:

The 2.0.0 release reproduces most of the features the original Perl version had, including the command line interface which is now built-in to the one program instead of having the separate ZenMsg binary. But I don't plan on stopping there: I have some fun ideas to add to ErrorGen in the future as well:

You can call this program from batch files or shell scripts to prompt the user with a graphical dialog box and read the button they chose from this program's standard output.

For example, from a bash script:

The full documentation is included below. Running errorgen --help from a text terminal will have the program print its documentation to you, but this won't work on the Windows version since a program must decide if it's a graphical or a command line app and can't be both.

I package this program for Windows and Linux for 64-bit and 32-bit x86 architectures.

The source code to ErrorGen 2.0 is hosted on my Gitea instance at:

The program should compile anywhere that Go and Fyne work, including on macOS.

It is released under the GNU General Public License version 3.