Is Zenmsg a virus? asks:

It only opened a command box, and nothing else happened. Is this a virus?

You'll want to run it from a PowerShell or Command Prompt window first (so that the console sticks around after the program exits), and you can see it just prints its usage information:

If you call it with ZenMsg --help it goes into full detail (the same documentation that's in the ZenMsg.html page the program ships with), including all the names of built-in icons. Every icon available on the Error Message Generator is built in to ZenMsg, and you can point it to a custom image on disk to use your own icon:

You can call ZenMsg from a batch file or any other program (e.g. a Python or Perl script could call ZenMsg.exe and send it parameters). For example, open Notepad and save the following as "example.bat" (with quotes, ensuring that it gets a .bat extension and not .bat.txt) and place it in the same folder next to ZenMsg.exe: 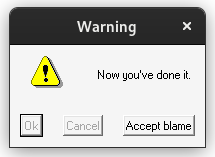 Double-clicking your example.bat file would then pop up that alert box. ZenMsg prints the user's selected button to its standard output, which we captured above by piping it into zenmsg-answer.txt (it's possible to get output from commands in e.g. Perl scripts too, so your program can ask the user a question and then have branching behavior depending on which button the user clicked on).

What kind of music do you listen to?

I listen to all sorts of things but most frequently are the following:

I generally like a lot of indie & electronic music in recent years. I have a Spotify playlist of several artists I like. Depending on my mood, some of my top go-to artists are Plantrae or Dirtwire if I just want some cool music with no/minimal vocals. Plantrae is also a great one to put on as some ambient music at the background of a party. Otherwise ZHU is often the one I click on and let Spotify have its way with me. Bob Moses is another favorite if I want something a little more bass-ey to jam out to.

I listen to a fair amount of pop music too, my top exposure to it being my car radio when I'm driving around, so whatever's on the Top 40 at a given time. Sometimes those songs will get stuck in my head and I'll play one on Spotify and let it wander and play similar songs for me. I also have a number of country artists/songs I like when I'm in the right mood and I have a short playlist on YouTube of sad songs when I need to get some emotions out.

And probably my #1 most favorite song in the world (which I don't let myself listen to very often, so that I don't ruin it for myself) is Canon in D.

For some reason it is not opening the ZenMsg file how do i make it work.

ZenMsg is a command-line program designed to be invoked by batch scripts or similar apps when you want to show a customized alert box pop-up. When you run the program without any command-line parameters (including if you just double-clicked on ZenMsg.exe from your file browser), the program just prints out its usage instructions to your command prompt and then exits; if you double-clicked to run it, exiting means you saw a cmd window for a brief second which then closed immediately.

To run it properly, open Command Prompt (or Powershell) first, navigate into the directory you placed ZenMsg.exe in, and run "ZenMsg" at the command prompt to see its usage instructions. For an "easy" way to get a Command Prompt opened to the right directory, you can open Windows Notepad and type this text into it:

And save it as "terminal.bat" (with quotations on it! so that it saves with a ".bat" extension, and not "terminal.bat.txt") in the same folder as ZenMsg.exe; then double-clicking on the terminal.bat will open a Command Prompt already pointed at the current directory, so you can just type "ZenMsg" to run the other program. For more info about the Command Prompt, see the DOS tutorial on ComputerHope.com which is where I myself learned how to use the Command Prompt, way back in the day!

Why is ZenMsg a command line program?

My Error Message Generator program is a GUI where you can build your custom alert box message visually, and ZenMsg is a command-line version that can pop up your alert box without the ErrorGen GUI being needed.

The reason that ZenMsg is a CLI tool is so that you can invoke it from other programs easily, including from batch files or scripts written in Perl, Python or anything else. Actually, it's name, "ZenMsg" is based on the GNU/Linux program, Zenity from the GNOME project.

You should also be able to create a Windows shortcut file that runs ZenMsg with parameters so you can have a desktop icon that, when double-clicked, pops up a ZenMsg alert box with custom icon, message and buttons if you want to prank your friends or something.

What does your sites name kirsle come from/ what’s the meaning?

The short answer is that Kirsle is just an AOL screen name I came up with back in middle school and doesn't mean anything; and it turned out to be such a unique name (that most all Google results for it were about me), that I decided to keep it around forever.

The longer answer is that it was originally inspired by a videogame character on the game NiGHTS: Into Dreams for the Sega Saturn. One of the baddies in the game was named Kircle, with a C, but when I read it I thought the C should've been pronounced like an S but anyway my screen name was based on Kircle for a time. But after multiple people (including text-to-speech programs) were "mispronouncing" it, I swapped the C out for an S and in doing so found a very unique username for myself.

Also, fun trivia: kirsle.net was the first ever domain name I registered, back in 2005 when I was in high school (my mom had to buy the domain for me!) I took the ".net" extension instead of ".com" because I thought "kirsle.com" didn't roll off the tongue very well; and because I didn't have a bank account to just buy my own domain names, but I already had several different websites, I thought a ".net" suffix would go well to put a bunch of subdomains beneath ".kirsle.net" to host all my various sites on one domain name! (Before kirsle.net, my other sites were hosted on random free subdomains I could find online, also had a few free .tk domains back in the day!) I do now have kirsle.com and kirsle.org and they just redirect to kirsle.net because that name still sounds the best to me!

I'm looking for a way to solve the following scenario using Rivescript and Python. The chatbot has no answer to a question, in this case it asks the user for the correct answer and records it in the rivescript file.

Do you have an idea? Does it even work in Rivescript?

This can be done with a little bit of creativity. Self-learning bots aren't an officially supported feature in RiveScript, but you can get something to work using object macros that write new replies out to .rive files to grow the bot's brain over time.

There's an example for this in the JavaScript edition of RiveScript, but its logic could be ported over to Python easily enough: https://github.com/aichaos/rivescript-js/tree/master/eg/learning

RiveScript Playground example you can test in your web browser: https://play.rivescript.com/s/0r4ZYvklR9

The basic ideas are:

The JavaScript example linked above works whether or not the program set the origMessage variable: if the program did not set the variable, the learned reply is just somewhat limited to only include simple text with very few punctuation symbols preserved.