It's been a while since I posted an update about my videogame project, Sketchy Maze but I've still been working on it and had released a handful of updates since my last post about v0.7.1 and my game is starting to get interesting. 😉

Sketchy Maze is a drawing-based maze game where you can draw your own levels freehand (like MS Paint) and make them look like anything you want. You can draw a castle, a cave or a giant boat, and then play it as a 2D platformer game. You can drag and drop some "doodads" such as buttons, keys, doors and enemies into your level to make it exciting. And as for those doodads? You can also create your own, too, and program them in JavaScript to do whatever you want. The game also includes a built-in Story Mode of example levels to simply play and/or learn from. 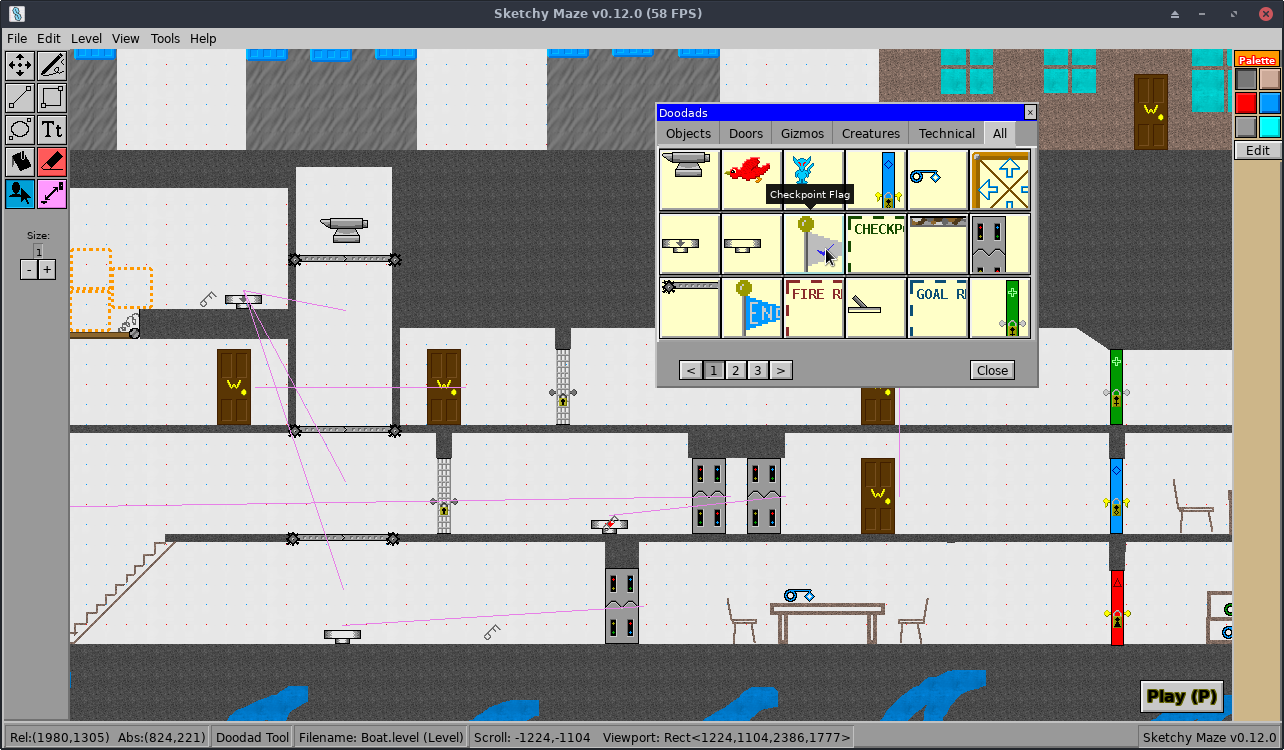 Since my last update about v0.7.1 the game has got:

The full change log is always available on the Guidebook for more details.

If you haven't seen my game yet, check it out! It's still in beta so it may be buggy or crash sometimes, but any feedback is welcome!

For the past few years, on and off (sometimes more off than on), I've been working on a videogame called Sketchy Maze and had been taking screenshots of it along the way. This blog post will be a bit of a retrospective and a series of screenshots showing it from its very first prototype up to the state that it's in now.

I wasn't even sure I was going to get very far on this project. I had once attempted programming a game in Perl and lost steam after barely having a working prototype. I had dabbled a few times getting started programming a game but then decided my brilliant idea of an RPG game wasn't worth all the programming. Stubbornly, I never wanted to just use a game engine like Unity or Unreal but wanted to program it all myself. And programming from scratch is considerably the harder way to go, so your game idea had better be worth it in the end!

The game idea that won out is a personal and nostalgic one. Back in the 90's when I was growing up with videogames like Sonic the Hedgehog and Super Mario Bros., I would often draw my own "mazes" or levels like on a 2D platformer game, with pencil and paper and then "play" it with my imagination. I'd imagine the player character advancing through my maze, collecting keys that unlock doors, pushing buttons that activate traps somewhere else on the page. I'd write little annotations about which button did what, or draw a dotted line connecting things together. My mazes borrowed all kinds of features from videogames I liked, all your standard platformer stuff: buttons, trapdoors, conveyor belts, slippy steep slopes, spikes and water and whatever I wanted.

So my game concept was basically:

See the full blog post to read how I even got this started and see screenshots of progression between the "Before and After" pictured below. My first target goal was just a stupid simple white window that I can click on to turn pixels black and save it as a PNG image. If I could get that far, I could do all the rest.

Have you ever wondered basically how blockchains work and what it means to "mine a Bitcoin" and why it's a time-consuming (and energy-intensive) process to mine one? In this blog post I'll summarize what basically drives blockchains and how they work, from my understanding of them anyway.

If you're anywhere close to a novice web developer or have ever hashed a password in your life, you already know the basic technology at play here. And even if you haven't, I think I can get you caught up pretty quickly.

The explanation I give below is surely super simplified and is based on my reading of how these work, along with several "Create your own blockchain in under 200 lines of code" type of tutorials which you could find for Python, or JavaScript or anything. It doesn't cover how the decentralized networking aspects work or any of those details, but just the basics on the cryptography side.

Tags: 0 comments | Permalink Go UI Toolkit and Other Libraries
May 1, 2020 by Noah

The Internet is full of freely available source code. If you're a software engineer and you're writing a new application, chances are a lot of the code you're writing has already been written thousands of times before by other engineers that came before you.

Some engineers seem to believe you can compose an entire complicated app just by mixing and matching tiny pieces already written before you. Pull a session manager from here, a template engine from there... a login manager, a password manager, a database accessor... all of these being small off-the-shelf components that you're trying to duct tape together into one coherent app. The actual code you as a developer write is just the few lines needed to stitch these all together. You'll have a production-ready app running in just a few minutes!

Sure, but in my career as a software engineer I've learned that it's usually better to write all those pieces yourself so that they fit together perfectly how you want, not just "good enough."

This is a story of a particularly annoying Python module I was dealing with at work.

This is something I wanted to rant about for a while: event loops in programming.

This post is specifically talking about programming languages that don't have their own built-in async model, and instead left it up to the community to create their own event loop modules instead. And how most of those modules don't get along well with the others.