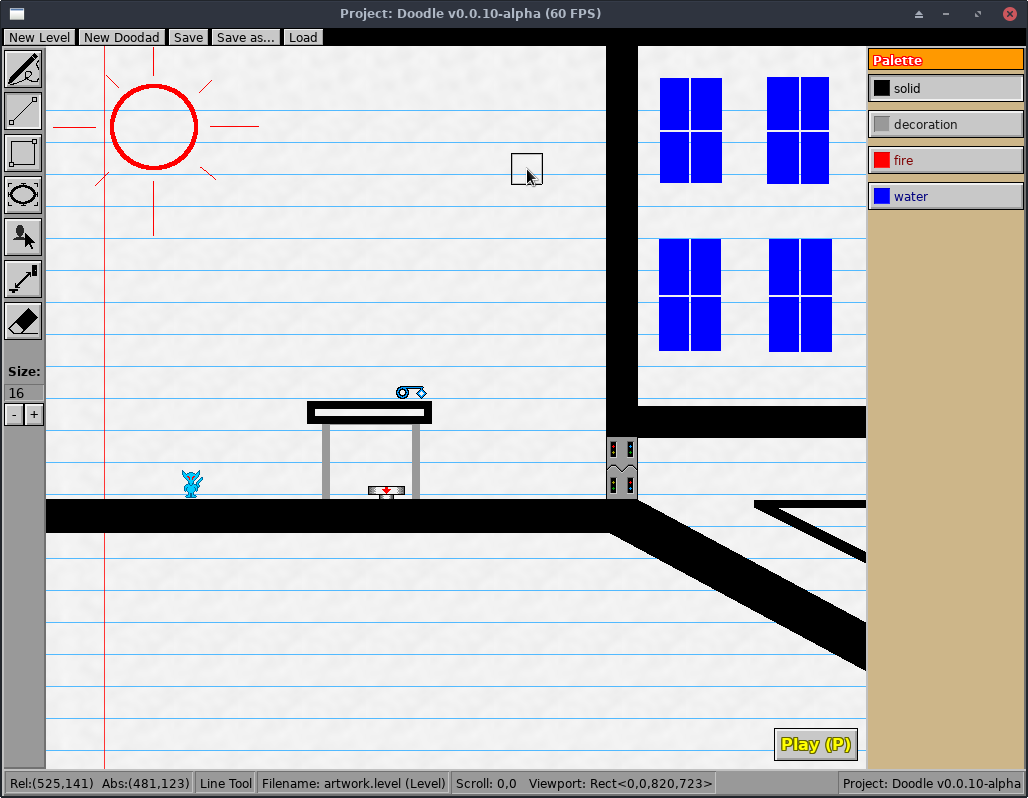 The theme of the game is "hand-drawn mazes." Players can create their own custom maps using a variety of themes: standard ruled notebook paper, yellow legal pad, blueprints or a plain white background.

Levels are drawn using pencil, line and rectangle tools. Different colored lines mean different things: black lines are for solid ground, red lines are for fire that will hurt the player, and blue lines are for water. You can freely decorate your level to look like anything you want (a castle, etc.) -- it's hand-drawn, go wild!

To add dynamic elements to your level, such as buttons that open doors or keys and locks, you can drag pre-made "Doodads" into your level and link them together. (The magenta lines in the screenshot are showing buttons connected to doors that will open/close them when touched.)

The above is about what's completed now, the following are the plans for features before Beta release:

This game is going to be very modder-friendly, as a high priority even. Release versions of the game will come with all the tools I used to create the built-in Doodads and the game will fully support making custom Doodads easy and fun.

When I was a kid, we had for game consoles the NES and Sega Genesis, which were filled with 2D side-scrolling platform games like Mario and Sonic. For fun, I would draw out maps on paper that were a similar style: side-view mazes.

I'd decorate the mazes with all sorts of little gizmos and gadgets based on various games I liked, and I'd draw lines that connected a button to the door that it opens, and I'd draw keys in different shapes that unlocked doors of similar shapes, and then I'd "play through it" in my head, imagining a player character walking through the maze and solving the puzzles.

This game is basically the realization of these childhood mazes. I don't have any of my original mazes on paper, but I have them in my head and I still remember all my favorite doodads I commonly used on my maps.

I've always wanted to make a game, and I've started a handful of small prototypes over the years but never completed any. None of my ideas for games were worth all the effort to actually make one. But then I realized I don't really want to make "a game" so much as I wanted a "game project" that I could just work on forever and constantly improve and add features to.

Project: Doodle is my big long forever project. I have a minimum checklist of features before a "1.0" version and then I'll still keep adding more nonsense to it over time and release free updates.

The game is Free In Alpha. Expect slowness and bugs, let me know if it crashes.

Releases are for 64-bit computers only thus far. Let me know if you need 32-bit support, otherwise I'll just get to it "eventually." Beta release versions will definitely include 32-bit support.

Follow my blog's Doodle tag for future posts about this game.