"By the way: If you like this game, buy it or die."
July 27, 2010 by Noah
I discovered I hold a small chunk of Internet fame even though nobody knows it.

In Pokémon FireRed and LeafGreen, there's an anti-piracy measure that I triggered late one night while using a MysticTicket and AuroraTicket to start my quest of capturing Lugia, Ho-oh and Deoxys. The ticket checker at Vermilion City told me to buy this game or die.

I created a You're The Man Now, Dog page using this animated GIF image (because at the time--near the end of high school--YTMND was cool). From there apparently the GIF found a home in the Bulbagarden forums.

Months (years?) after making the GIF I decided to google this and see if anyone else has seen it. Apparently it's been verified by various ROM dumpers to be legitimately in the game's code, so my ROM wasn't just a hacked copy. And that's when I discovered the familiar-looking animated GIF; verifying its MD5 hash proved it was indeed the result of my 5 minutes spent taking screenshots and animating them that these people were all linking to.

Interestingly, it seems that the GIF is the only screenshot (animated or otherwise) that exists on the topic. IIRC all I did was enter some cheats to get me a MysticTicket and AuroraTicket (either by cheating and making my monsters carry them when captured and subsequently take them away, or else by buying them at a Pokemart) and then attempting to catch a boat with them in hand.

Then suddenly the girls come over and ask me if I'm 21 years or older. It was a weird question that I'd usually only expect to be asked at a club by people who don't believe I got in using a legitimate ID. But they were apparently looking for people to audition for Beauty and the Geek between the ages of 21 and 28 and they picked me to come in for an audition.

I've never actually watched the show but I've heard about it, and, while I'm a geek, I'm nowhere near the calibre of complete loser-nerd that usually appears on that show. I don't expect that I survived the audition phase, but I'm not really too concerned about it. I'm actually more worried what'll happen if I DO survive the audition, and how time-consuming doing the show might be and how it would affect my current job. Perl software developers are more valuable than developers of other programming languages because there's so few of us, so a Perl developer missing work is worse than, say, a Java programmer.

Anyway, the audition was earlier today at 10am in Manhattan Beach, at the Raleigh Studios. They sent me an e-mail with the necessary forms I had to fill out and some sample biography documents from former cast members. The sample bio they sent me seems to have been that of Tommy, from the 5th season of the show. They also instructed me to bring whatever geeky things I could... dungeons & dragons stuff, weird collections, awards for geeky things, etc. -- But, as I'm more of a computer geek than anything else, I didn't really have much to bring in, so I just decided to bring my Jr. High and high school spelling bee trophies, my "Best of Architectural Award" plaque from my senior year AutoCAD project, and a deck of Pokémon cards that I've owned since I was like 12 but which are still in good condition. I do play Dungeons & Dragons, but I don't own the figures or dice so couldn't bring any in.

Anyway, so I showed up at the studio. The parking garage was quite a walk away from the building I had to be at, and the route I took to the building took me along the backlot behind the studio buildings. Some of the studio doors were open and I could see inside, and see various sets for who knows what. One thing I saw looked like the back side of a living room set, possibly for a sitcom or something? I dunno.

I had arrived ridiculously early. The audition was at 10 but I left an hour early because of the notorious traffic on the 405, but, at that time of day the southbound traffic doesn't exist and I got there in a whole 5 minutes. So I waited up in the lobby of 3Ball Productions, who was doing the casting. 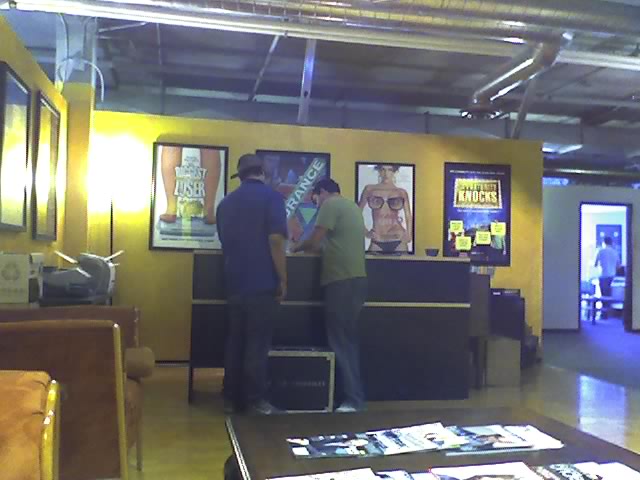 This is a picture I took of the room I was in.

It was a long and boring wait. Finally the person to audition me arrived and we went into one of those audition/interviewing rooms (it's kinda a mini "set" in its own right... odd seating furniture and a camera pointed right at it). So she asked me some questions and had me answer in complete sentences because the video is going to be edited so her questions are cut out and ultimately it will turn into a quick 2 minute video to show to the producers. She asked questions about my background, what I did in high school, what my GPA was, what geeky things I'm into, what I don't "get" about girls, what kind of girl I like (seriously? this was some hard stuff to answer), etc.

(If I must pretend I'm into girls, then tomboyish girls are the ones for me. haha.)

And then 15 minutes later it was over. I headed off to work and went about the rest of my day.

If I don't hear from them by the 21st then it means I wasn't a finalist. (I don't expect to be contacted anyway). I did ask out of curiosity how their show works with people who have jobs. Apparently all the cast members have to live together in this mansion the whole time (or until they get eliminated), they shoot for 8 to 10 hours a day 5 days a week for 3 weeks, but weekends and off-camera time is free. So in the worst case scenario that they do call me, it would be theoretically possible to keep up with my day job at the same time. But I'd have to get some more clear and concise information and pass it by Samy. But, I really don't think I'll have to worry about any of this cuz I'm totally not THAT much of a geek.

So, I went today for the experience of seeing how exactly the audition for a reality TV show goes down and cuz I didn't know what I'd see or who I'd meet. I didn't meet anyone famous (so far as I know), just a bunch of people who work behind the scenes to make TV happen. It was cool either way.

So, thus concludes my crazy story of the last couple of days.

Update [11/22/08]: It's the 22nd now and I haven't heard back from them. Darn. Looks like I'm not gonna be famous after all. But again, I don't care. I never anticipated that they would contact me. It does make for an interesting blog entry though, so I'd still recommend reading it if you haven't done so. :)