March 16, 2010 by Noah
A few interesting links I found recently:

This is an allegedly fully standards-compliant X11 window manager. It appears to be very minimalistic however, but is pretty interesting nonetheless. The window manager, if you don't know, is the software that draws title bars and window borders around all of your windows.

This is a desktop panel written in Perl, using the GTK+ toolkit (same as GNOME, Xfce and Lxde). While meant to be used in conjunction with minimalist window managers such as Blackbox that don't tend to come with panels of their own, it could easily replace gnome-panel or xfce4-panel in their respective desktop environments.

I played with it for a few minutes by doing a `killall xfce4-panel` to nuke my panels and then started this one in their place. It comes with 36 panel applets, some of which require additional perl-Gtk modules to be installed for them to really function properly.

Nowadays, Perlbox is all about voice control software for Linux. But apparently a long time ago, Perlbox was an X11 desktop environment written entirely in Perl/Tk, which is the GUI toolkit I used in my Perl CyanChat Client, and you can see how ugly it is if you look at the Linux screenshots for that program.

I played around with this one. It creates a "panel" of sorts that it sticks on the bottom of your screen. Besides being ugly as sin, this panel doesn't even hook into your window manager to show a taskbar list of your running applications. It's really clunky and not very fun to use, and did I mention how ugly it is?

I logged in with the Blackbox window manager to test it and I forgot to grab a screenshot of it, but there's a (scaled down) screenshot on an old freshmeat project page for it. Also, it's here: 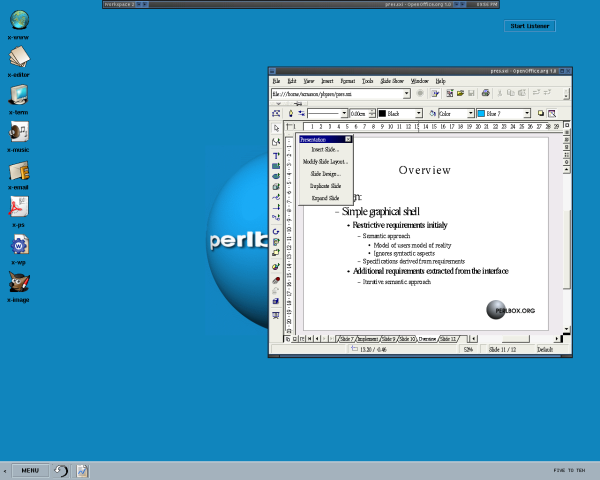 These projects are interesting and I'm definitely gonna save a copy of their source codes for reference material in case the day comes where I get the utterly insane idea to ditch all the existing Linux desktop environments and create my own, from scratch, that does what I want (the only complaint on my list so far with all the desktops I've tried is: when a panel auto-hides, they like to destroy all their panel applets, so that when the panel is unhidden you see the contents jump around as all the applets load back up. Why!? Just move the panel off the screen, don't destroy all its applets.)

Just one complaint isn't enough (yet!) for me to roll my own desktop environment though. :)

outstanding! thanks for your work!