February 12, 2009 by Noah
My first computer ever was an old late-80s Tandy machine that was running MS-DOS and Windows 3.1 -- I got it when I was in kindergarten or first grade, and kept it until after I started 7th grade. So, I have more than a few nostalgic memories with the operating system, and have been trying to somehow virtualize it and relive a little bit of my past. 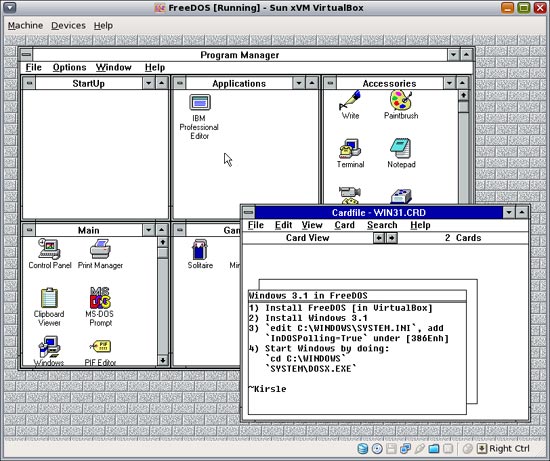 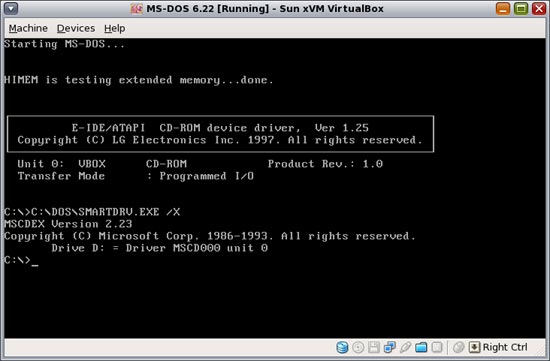 There are 18 comments on this page. Add yours.

This web page is cool!

The simplest (and fun) way to get old operating systems working is to get the real thing. Old computers are dirt cheap - you may even be able to get one free like I did. A 6x86 PR200+ (c. 1996). Runs excellent on 256mb ram and I was able to get an ethernet card to work. Setting it up was hard at first because some drivers are difficult to find for the PCI cards. Another good thing is that although the platform is obsolete, software is plentiful everywhere for it. Graphical browsers fall over, but I am working on getting Lynx running on it. I already have gopher, newsgroups and other texty internet stuff. It started out as a novelty, now I find myself using it more regularly - kinda like a trainset hobby. A very pleasing computing experience.

Well I managed to get win3.1 running ok under dosbox, with S3 Video Drivers, and colors are not off or gone bad, works quite well actually :)

In DOSbox 0.74, you can choose the V-card to emulate, then try finding drivers. I was able to make it use 800x600x16 under DOSbox. Google for a Win31 guide on VOGONS. However, I used WIN32S that comes with Pilots games, as Win32S that you can find on Google result #2 didn't work and gave Error 21. Sorry for necroing, but this is if someone hits this page. :)

If I can remember back that far those Microsoft floppies for MSDos 6.22 were formatted with extra tracks / more sectors (MDF Microsoft Distribution Format ???) - you could achieve the same effect with IIRC "fdformat" which MOST FDcontrollers would let you have something like 21 sectors per track rather than standard 18 and 82 tracks rather than 80 on a normal 1.44MB 3.5" floppy - for a total of around 1.8MB (or 1.44MB on a really 'floppy' 1.2MB 5.25" disk. 8-) ). Can't recall whether the DISKCOPY command would let you duplicate such disks but I suspect that modern Windoze would probably moan about such disks nowadays...

Sweet thanks for the dos 6.22 and Win 3.1 download :) I first learnt to program in C on this sort of environment - i'm running it on vmware. The exclusive mode seems to give an authentic feel :)

Thank you! I've been trying (on and off) to get Win 3.11 working on a FreeDOS box for several weeks. This site got me there once I got past the LFN driver issue in SYSTEM.INI.

Just use dosemu if you want to do it the easy way. Getting this going in virtualbox is neat to see though, especially to fix the 100% cpu problem.

Brilliant, works well in virtualbox and on my old desktop.

I actually disagree with VirtualBox not working well. I found it to be the quickest way to get Windows 3.11 up and running. This is most likely because i'm runing a newer version than the one in this post. 0.74 is what i'm running, and i was able to tweek the cpu setting to make it run perfectly for me.

Other advantages are that the entire system can be packaged up and distributed as a whole. So i can create an optimal configuration for one game, duplicate the entire dosbox folder, and install a a different game that needs different settings on the duplicated folder, and setup win.ini and autoexec.bat to automatically launch the game. Now i have a fully functioning DOS game that i can just double click to launch!

I actually disagree with DOSBox not working well. I found it to be the quickest way to get Windows 3.11 up and running. This is most likely because i'm runing a newer version than the one in this post. 0.74 is what i'm running, and i was able to tweek the cpu setting to make it run perfectly for me.

Other advantages are that the entire system can be packaged up and distributed as a whole. So i can create an optimal configuration for one game, duplicate the entire dosbox folder, and install a a different game that needs different settings on the duplicated folder, and setup win.ini and autoexec.bat to automatically launch the game. Now i have a fully functioning DOS game that i can just double click to launch!

Another advantage of DOSBox over VirtualBox is that DOS is already installed.

Another advantage of DOSBox over VirtualBox is that there is a shared folder! No need to setup network, which is very tedious on bare DOS, slightly better on Windows 3.11.

works under VirtualPc 2007, just need to see if I can find the sound and network drivers.
I wonder if I can get pcoptimizer to run on win 3.1 ?

OMG You helped me to install windows 3.11 on freedos

It's 2018 and I still use Windows 3.11 for nostalgia purposes and gaming as well - Castle of the Winds! Thank you very much for that Noah.