September 22, 2009 by Noah
Update (Nov 17 09): The final version of Fedora 12 fares slightly better with GNOME Shell, but not by much. It also works just fine with Compiz Fusion within VirtualBox. Read more about it.

This is a sequel to my rant about GNOME Shell. I decided to back up my claims with an experiment.

Installing gnome-shell in a virtual machine with no 3D hardware acceleration.

Every single desktop environment that exists right now will run just fine in a virtual machine with no 3D hardware acceleration: XFCE 4.6 and older; KDE 4.3 and older; KDE 3.x and older; GNOME 2.26.3 and older; LXDE; and of course all of the desktop-less window managers (IceWM, et cetera).

GNOME 3.0, I claimed, with its GNOME Shell, will be the first desktop environment that will not run unless the user has 3D hardware acceleration, and that there is no fall-back. Here is the proof:

No Guest Additions; No 3D

I installed the Fedora 12 Alpha in a virtual machine with VirtualBox. Fedora 12 Alpha (11.92 Rawhide) is the latest development release of Fedora, and the Rawhide repository contains up-to-date packages for gnome-shell. So with this I don't have to worry about whether I just compiled gnome-shell in the wrong way; the Fedora dev team has built the RPMs here. 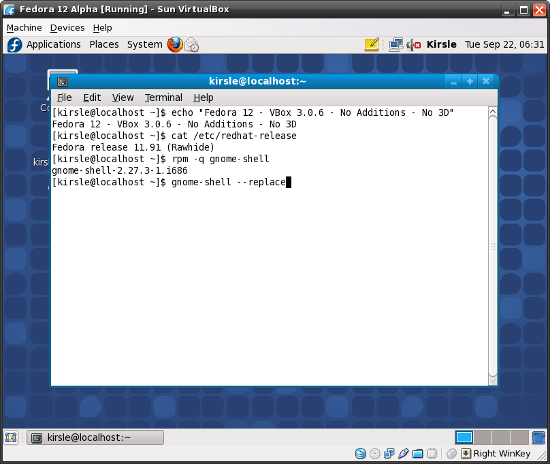 Getting ready to launch GNOME Shell 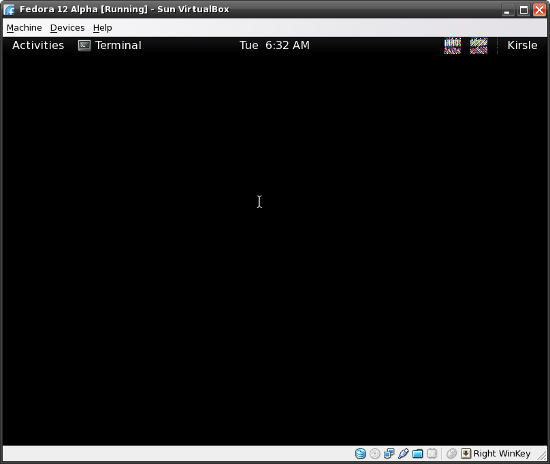 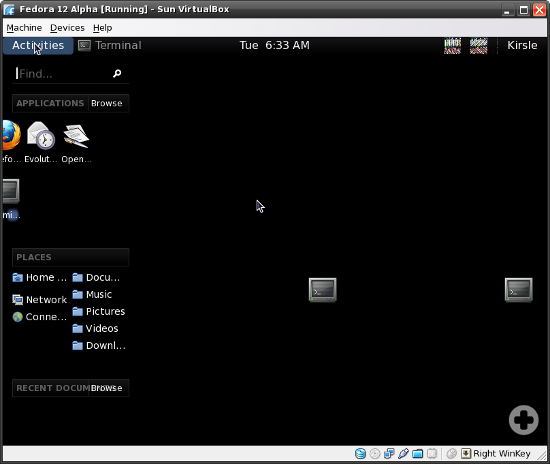 Basically, my screen is mostly black; I can't see any of my windows. I can see only a little bit of the GNOME Shell interface.

Let's put on the dumb end user hat and say Joe Average installed Ubuntu 10.10 which might come with GNOME 3.0 and GNOME Shell, he hasn't installed his nvidia drivers yet because they're proprietary and Canonical can't legally include them with Ubuntu, and he logs on and sees THIS. He's lucky that X11 didn't crash entirely and send him back to the login screen, but nonetheless he can't see anything. He can't see Firefox to start browsing the web trying to find a solution to this problem.

After installing the VirtualBox Guest Additions in the new virtual machine, but still not enabling 3D hardware acceleration, the results are...

I won't post screenshots because they look just like they did the last time. I get a mostly black, unusable desktop.

Of note however is that the terminal printed this upon starting the GNOME Shell:

VirtualBox knows GNOME Shell was requesting 3D support via OpenGL, and the guest additions driver gave me this warning. Let's move on...

VirtualBox's 3D support is fairly new and still full of bugs. Actually their support for Linux guests is even more recent than the 3D support itself. I haven't tested running the ol' Compiz Fusion in VirtualBox, but I've heard that with the 3D support this becomes possible.

I've personally not used it. But it is known to be buggy; VirtualBox labels it as "experimental"... well, here's why: 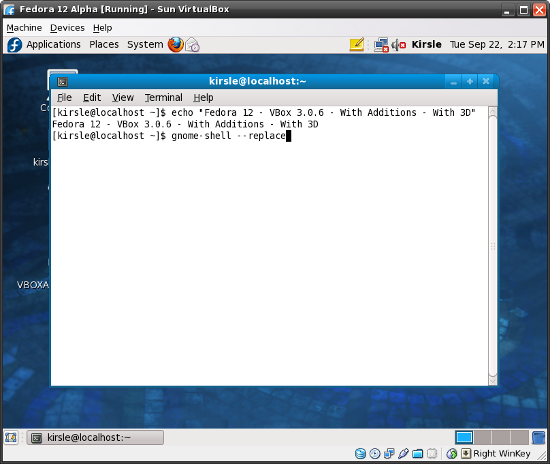 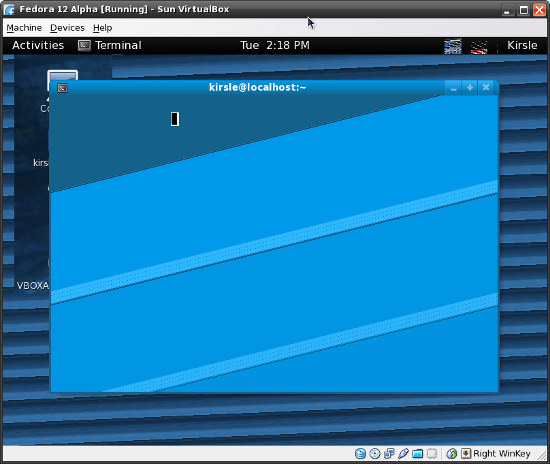 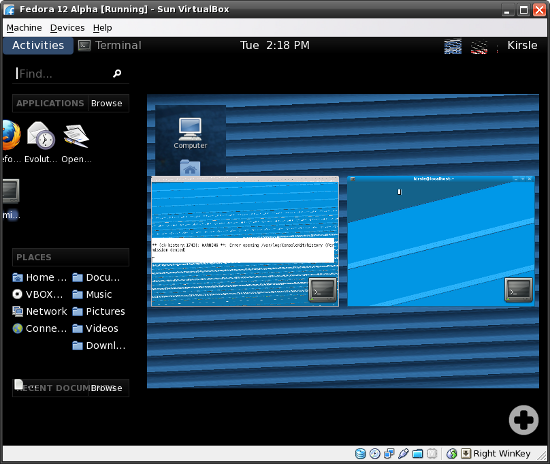 In this experiment, even with 3D acceleration by the virtual machine, GNOME Shell is not usable. Again, though, VirtualBox's 3D acceleration is still in the "experimental" phase. It probably doesn't work a whole lot better with Compiz Fusion, either. Plus my video card might just suck (VirtualBox basically passes the guest's OpenGL calls directly to the host's video card).

But the thing to take away from this is:

I rest my case.

Now let's see if the GNOME dev team can turn this around in the next year (doubtful; they all come off to me as a bunch of eye-candy-obsessed children who'd rather snazz up the desktop because they think it's "cool" than to worry about things like usability, functionality, or accessibility... and with absolutely no thought given to the user experience, and no usability studies done, etc.).

GNOME Shell for the lose.

There are 12 comments on this page. Add yours.

I completely agree. Gnome-shell is a terrible, terrible idea, unless it is only an option, and not enabled by default.

Did you forget: it's an early dev-release. and if you just have an old vw beatle - than its its a great little car but eventually it's not an audi...

Thanks Christoph, for pointing out the obvious.

Complaining about "very early" previews under "active development" (quoted from fedora docs) is like complaining about a funny-looking prototype that doesn't work correctly!

What a useless waste of blog space, really. Thanks for wasting my time.

Compiz actually works reasonably well in VirtualBox (with a few regressions in VB 3.1.0 and 3.1.2), but gnome-shell is still a non-starter in 3.1.4.

stupid retards. they are being released so they can be judged. that's how technological ideas move forward. criticism. live with that.

Actually, they're being released to be tested, not judged. Yes, there is some judging during testing, but that is not the primary focus. The focus is on letting others test it and give feedback on how to make it better.

Not that negative feedback is totally useless, but it's not as helpful as constructive feedback, and it doesn't help developer moral at all.

I've tried the gnome 3 preview, and it just sucks so bad. I've always been a little wary of change, but if its for the better then ok I'll give it a try. But Gnome 3 has to be the worst D.E. I've ever used. And I've been using Linux, BSD, et al for a long time now. It's so bad I am actively using Ubuntu now, even though I am not a huge fan, due to their Untiy D.E. which I quite like. There's a lot of customisation available, and I'll be posting my own version of Unity later, it'll be similar to OZ-Unity which is great.

So, KDE? Gnome 3? Unity or any of the others? Out of those it'll either be KDE or Unity(modified), but Gnome guys have shot themselves in the foot here.