I jumped ship from GNOME 2 to XFCE when GNOME 3 was announced and have ranted about it endlessly, but then I decided to give GNOME 3.14 (Fedora 21) a try.

I still installed Fedora XFCE on all the PCs I care about, and decided my personal laptop was the perfect guinea pig for GNOME because I never do anything with that laptop and wouldn't mind re-formatting it again for XFCE if I turn out not to like Gnome.

After scouring the GNOME Shell extensions I installed a handful that made my desktop somewhat tolerable: 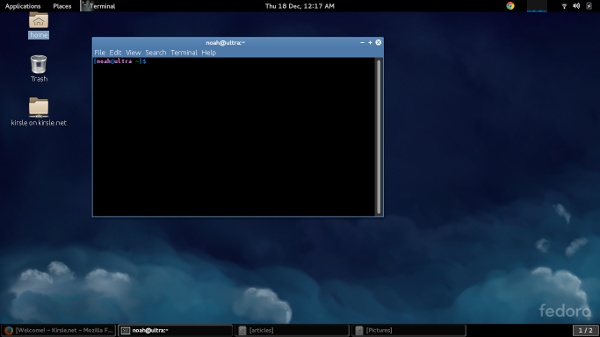 And then I found way too many little papercuts, some worse than others. My brief list:

Settings weren't always respected very well, and some apps would need to be "coerced" into actually looking at their settings. For example, I configured the GNOME Terminal to use a transparent background. It worked when I first set it up, but then it would rarely work after that. If I opened a new terminal, the background would be solid black. Adjusting the transparency setting now had no effect. Sometimes, opening and closing a tab would get GNOME Terminal to actually read its settings and turn transparent. Most of the time though, it didn't, and nothing I could do would get the transparency to come back on. It all depended on the alignment of the stars and when GNOME Terminal damn well feels like it.

Also, I use a left handed mouse, and GNOME Shell completely got confused after a reboot. The task bar and window buttons (maximize, close, etc.) and other Shell components would be right handed, while the actual apps I use would be left handed. So, clicking the scrollbar and links in Firefox would be left-handed (right mouse button is your "left click"), and when I wanted to close out of Firefox, I'd instead get a context menu popup when clicking the "X" button. Ugh!

I wanted to write this blog post from within GNOME but it just wasn't possible. With different parts of my GUI using right-handed buttons and other parts using left-handed ones, I had context menus popping up when I didn't want them and none popping up when I did. After a while I thought to go into the Mouse settings and switch it back; this didn't help, instead, the parts that used to be right-handed switched to left-handed, and vice versa. It was impossible to use. I just had to painstakingly get a screenshot off the laptop and to my desktop and deal with it over there instead.

XFCE is going back on this laptop.