November 25, 2008 by Noah
Fedora 10 has finally been released. Thus I can finally get rid of the countdown script I had that was messing with my page's ability to validate as HTML 4.01 Strict.

The most exciting thing about Fedora 10 for me is that my wireless card works now, just automatically. I installed it on my laptop, logged in, and before my GNOME panels even slid into view, the balloon from the network applet was already visible telling me there were wireless networks nearby. :-D So no longer do I have to fsck with the kernel or use MadWifi patches to get the wireless to work.

Also, Fedora 10 is just really pretty. I actually downloaded a leaked copy of the DVD image the day before it was officially released, to install it in a virtual machine and play around with it (I wanted to wait for it to be officially released so I could verify the sha1sum of the DVD image before installing it on any real PCs). On the virtual machine there was no graphical boot screen, only a text-mode one that had a text-mode progress bar at the bottom. But on my laptop the boot screen was pretty awesome. It had the supernova picture that's part of Fedora 10's theme and it had solar flare animations coming off it.

So, after installing it on my laptop, installing the OpenSolaris GTK+ theme, and tweaking some of my applets and panels the way I like 'em, here's a screenshot: 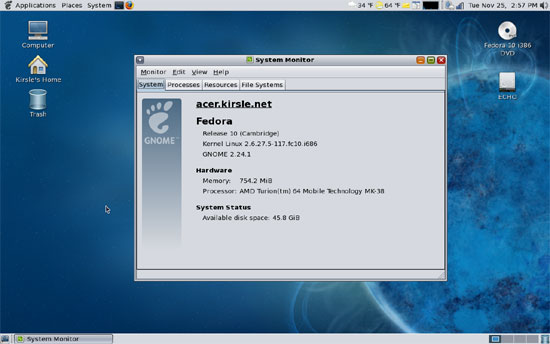